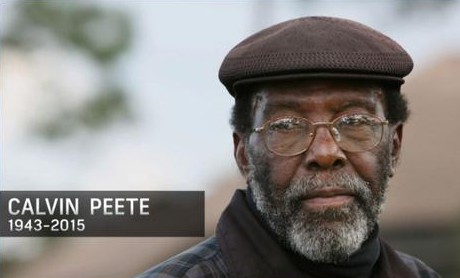 Calvin Peete, who taught himself how to play golf at 24 and became the most successful black player on the PGA Tour before the arrival of Tiger Woods, died Wednesday morning, the PGA Tour said. He was 71.

Peete won 12 times on the PGA Tour, mainly on the strength of his uncanny accuracy off the tee. Peete led the PGA Tour in driving accuracy for 10 straight years starting in 1981, and he captured the Vardon Trophy over Jack Nicklaus in 1984. He also played on two Ryder Cup teams.

More impressive than his record, however, was the journey to compete — and beat — the best in golf.

Known for his length off the tee, Calvin Peete won 12 times on the PGA Tour.

Born July 18, 1943, in Detroit, Peete used to pick beans and corn in the fields in Florida to make money for his family. He eventually financed a station wagon from which he sold vegetables and other goods to migrants. He wasn’t interested in golf, even at the prodding of friends. Peete had spent enough time in the hot sun.

According to a 1983 profile in The New York Times, Peete became interested when he saw how much money golfers were making. He first took up the game in Rochester, New York, when he was 24. Within six months he was breaking 80, and a year later he was breaking par.

Even more remarkable is that Peete had a left arm he couldn’t fully extend. He had fallen from a tree and broken his elbow as a kid, and it was never properly set. That didn’t keep him from developing a repeatable swing that always seemed to find the fairway.

“Some of the players still drive farther than I do,” Peete told The Times in the 1983 profile. “But I’m always in the fairway, and they’re sometimes in the trees.”

Four years after finally earning a card, he won the Greater Milwaukee Open in 1979 by five shots over Lee Trevino, Victor Regalado and Jim Simons. He finished 27th on the money list that year and cracked the $100,000 mark ($122,481) for the first time.

Peete won four times in 1982, tied for the most titles on the PGA Tour that year with Tom Watson and Craig Stadler. He won the Vardon Trophy for the lowest stroke average in 1984, and his biggest victory was a year later when he captured the Players Championship.

“I can still remember watching Calvin hit drive after drive, straight down the middle of the fairway, an amazing display of talent he possessed despite some of his physical limitations,” PGA Tour commissioner Tim Finchem said. “Calvin will always be remembered as a great champion and an individual who consistently gave back to the game. We will dearly miss him.”

Peete finished his career with over $3.2 million in earnings from the PGA Tour and Champions Tour.

He was inducted into the African-American Ethnic Sports Hall of Fame in 2002. He also had a degree. A few years after his first PGA Tour victory, he returned to Detroit to take the GED diploma test.

“I love this game,” Peete said in The Times profile. “You’re out in the fresh air and you can meet good people, like the President of the United States — I once played a round with President Ford — and you have a chance to make $400,000 a year.”

Two years later, the season he won the Players Championship and the Phoenix Open, he earned $384,489 to finish fourth on the money list.

Peete is survived by his wife, Pepper, and seven children.

From Competitions Secretary B. Hudson

Dust off your clubs, take out your diary and warm up your calculator – the race is soon to begin.

Can the talented Mr Hyland retain his crown, or will we have a new name on the beloved trophy that is the Castleknock Player of the Year.

You can follow your fortunes on the members’ website as we build toward the October 3rd finale, and remember the more you play the more chances you have of climbing the leader board and getting your hands on the illustrious prize.

This years’ winner will be the player with the highest points total from a maximum of 10 of the 20 qualifying events listed above. Please note you may play in as many of these events as you like but only your best 10 scores will count.

So come on take up the challenge, join the race and make this years’ event our most successful yet.

Augusta National Golf Club was founded by Bobby Jones, the legendary amateur champion, and Clifford Roberts, an astute investment banker in New York. Jones helped design the golf course, working alongside the esteemed British architect Dr. Alister Mackenzie. Jones’s popularity within the game helped attract golf’s biggest stars to the Masters, beginning with the inaugural event in 1934. Roberts oversaw innumerable details of the Tournament. He tirelessly sought to refine the Masters experience for the patrons and competitors and the wider world of golf.

Following are short bios of each man’s life. Robert Tyre (Bobby) Jones, Jr., was born on St. Patrick’s Day, March 17, 1902, in Atlanta, Georgia. As an amateur golfer, Jones dominated the game from the early 1920s through 1930. Jones won 13 major championships between 1923 – 1930. His record includes five U.S. Amateur Championships, one British Amateur Championship, four U.S. Open Championships and three British Open Championships. In 1926, he was the first man ever to win the Open Championship of each country in the same year. In 1930, Jones accomplished the unprecedented feat of winning golf’s Grand Slam by capturing the British Amateur on the Old Course at St. Andrews, the British Open at Royal Liverpool in Hoylake, England, the U.S. Open at Interlachen Country Club in Minneapolis, and the U.S. Amateur at Merion Golf Club in Ardmore, Pennsylvania. In 11 of the last 12 Open Championships he played—nine U.S. Opens and three British Opens— he finished first or second. Jones retired from competitive golf in 1930 at age 28. He came out of retirement only to play annually at the Masters. He was inducted into the World Golf Hall of Fame in 1974, three years after his death.

Off the course, Jones designed golf clubs; wrote four books, including “Bobby Jones on Golf”; penned hundreds of newspaper articles; and gave instructional performances in several movies. He helped found and make successful the Masters Tournament and Augusta National Golf Club, where he was named President in 1933 and remains President in Perpetuity.

Jones excelled academically as well. He studied engineering at Georgia Tech, earning a B.S. degree in mechanical engineering, and then completed a B.A. in English literature at Harvard. He later entered Emory University to pursue a degree in law, passing the bar exam after his first year of school.

He was married to the former Mary Malone and together they had three children, Clara Malone; Robert T., III; and Mary Ellen. Jones died in 1971 of the spinal disease syringomyelia at age 69. Clifford Roberts was born on a farm in Morning Sun, Iowa, in 1894. An astute investment banker, Roberts made his mark on Wall Street as a Partner with Reynolds & Company.

Under his direction, the Masters made numerous innovations that are now commonplace in golf. He changed the locations of perimeter mounds to improve gallery viewing. He was the first to use a series of Leader Boards placed throughout the course. He also devised a system for showing the cumulative score of each player—red numbers for under par, a green zero for par, and green numbers for over par. Roberts played a key role in the first Masters television broadcast on CBS, in 1956, and in many thereafter, working closely with the network.

It was Roberts who in 1948 invited General Dwight Eisenhower to visit Augusta National and who would later become a political and financial advisor to the President. Eisenhower became an active member of the Club. During his lifetime, Roberts received many awards and honors, including service on the PGA Advisory Committee from its inception in 1943 until his death, appointment by the USGA to serve on the Bob Jones Award Selection Committee, and enshrinement in the World Golf Hall of Fame in 1978. He was the author of “The Story of the Augusta National Golf Club,” published in 1976, and a subject of “The Making of the Masters: Cliff Roberts, Augusta National, and Golf’s Most Prestigious Tournament,” published in 1999.