Fergus Bisset takes a look at how club golf started more than 250 years ago in an Edinburgh pub. 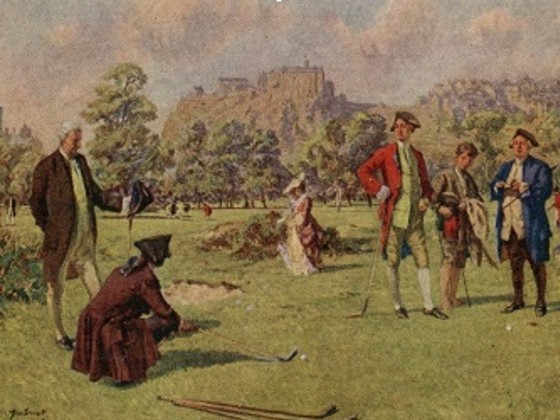 The very earliest origins of golf are impossible to identify. The game as we know it may have evolved from cross-country stick and ball games like “chole,” popular in the Low Countries in the early 14th century and witnessed by Scottish soldiers, but the link can only be conjecture.

What is absolutely certain, however, is the first definitive record of golf comes from Scotland – a 1457 statute of Scottish King, James II that specifically forbade the playing of “golfe.” The pastime had become so popular as to distract citizens from important activities like archery practice – more critical to the safety of the realm at a time when relations with the English were strained. In 1502, James IV signed a treaty of perpetual peace with England and the Scots were once again free to pursue such indulgent activities as golf. For the next 250 years, the sport’s popularity grew and there are numerous written references to golf.

Acquaintances and rivals competed in matches on the links land of Leith, St Andrews, Montrose and elsewhere. But until the 1740s no club or society had emerged to regulate or govern the game. There was no official set of rules and there were no organised competitions. St Andrews may now be viewed as the “Home of Golf” and it is, of course, the location of the game’s governing body – The R&A. But St Andrews was not the crucible of organised golf. Leith Links in Edinburgh holds that honour.

It can be argued that this stretch of land bordering Edinburgh’s port may have been the original golfing ground in Scotland. It was certainly the venue for games between a group of gentlemen who went on to form the first golf club. The establishment of the Company of Gentlemen Golfers seemingly arose from the participants’ enjoyment of a few post-round libations, (club golf starting as it was meant to go on.) The players would meet in Luckie Clephan’s tavern at Leith and it’s most likely here they discussed petitioning Edinburgh City Council for a silver club to be played for annually on the links of Leith. The driving force was probably Lord Duncan Forbes – President of the Court of Session in Edinburgh.

On 7th March 1744, Edinburgh City Council consented to the request and, as such, The Honourable Company of Edinburgh Golfers (the world’s oldest golf club) claims this as their birthday.

The competition was to be open to all and a condition was that a formal set of rules would be required. The winner of the event was to attach a silver coin or ball to the club and he would become “Captain of the Golf” for the following year. The victor would put his signature to the first official set of golfing rules.

There were 12 entrants and John Rattray, a renowned surgeon and golfer of some skill, took the prize. He then was the first captain and had the honour of signing the first set of rules. These were 13 articles on which all subsequent codes of the game were based.

By 1754 a silver club was being played for by the Gentlemen of Fife, later to become the Royal and Ancient Golf Club. A set of rules were drawn up there, identical to those of the “Gentlemen Golfers” save for an allowance for varying local conditions at Leith and St Andrews.

John Rattray won again at Leith in 1745, but later that year found himself caught up in the Jacobite rising of Charles Edward Stuart. He was summoned to attend to “Bonnie Prince Charlie’s” wounded men at Prestonpans then accompanied the “young pretender” in his advance to Derby, and retreat to Culloden. Rattray was captured at the battle and sentenced to hang for treason. Luckily for him his fellow “Gentleman Golfer” Lord Duncan Forbes, (head of Scotland’s supreme court and loyalist,) successfully petitioned for his release. Ostensibly this was because Rattray was invaluable as a surgeon in Edinburgh, but surely Forbes’ intervention had something to do with the fact Rattray was his foursomes partner!

Play continued for the silver club over the five holes laid out at Leith, but in 1764 the competition was restricted. Entry was no longer open to all-comers, only to members of the Company of Edinburgh Golfers. It’s unclear whether this change was in response to inappropriate behaviour by previous entrants or simply because there were too many competitors.

The course at Leith, five holes each around 400 yards in length, lay between the sea and sand dunes and was played round twice for competition purposes. Course directions were fairly rudimentary with compass points and landmarks used as the guide. The course record for 10 holes was 60 set by Mr H.M. Low in 1826. It may not sound overly impressive but using a feathery ball over decidedly rough terrain it was an impressive knock.

During the Napoleonic Wars, military exercises began to encroach on play over the Leith Links, so too did cattle and the general public. This combined with a general deterioration of “the green” at Leith led a number of members of “The Honourable Company of Edinburgh Golfers,” (titled thus after a charter granted in 1800,) to play more golf at Musselburgh Links, a few miles along the coast.

Financial mismanagement of the club at this time necessitated the sale of the original clubhouse at Leith and, in July 1836, the Company moved to Musselburgh.

For the next 55 years, Musselburgh was the Honourable Company’s home. When they first arrived they had no premises so used part of the Grandstand alongside the racecourse inside which the golf course was (and still is) set.

By the 1860s it had been decided that using the Grandstand for storing clubs and changing was unsuitable, so a clubhouse was built and members were charged an annual subscription for the first time to help cover the cost.

At first the golf course was shared with Royal Musselburgh Golf Club and members of the public: The popularity of the sport continued to increase, particularly with the arrival of the more affordable “gutty” ball in the late 1840s.

Musselburgh Links originally had seven holes with two more opening in 1838 then 1870. At that time it measured some 2,800 yards with the first holes played over more clay-like turf, the surface becoming sandier as the round progressed. Bunkers, gorse, plateau greens and incessant wind provided protection – just as with the links course of today.

The Open Championship was contested at Musselburgh six times, most notably in 1883 when Bob Ferguson finished with three straight threes to force a playoff with Willie Fernie.

By this time four clubs shared the course at Musselburgh – the Royal Burgess and Bruntsfield Links having arrived. As at Leith, overcrowding was once again a problem. But opinion was very much divided amongst the Honourable Company as to whether another move was necessary.

In 1890, sites at Hedderwick on the Tyne Estuary by Dunbar and at Cragielaw by Aberlady were considered. Both had drawbacks though and two new proposals emerged, one at Saltcoats, another at Muirfield.

Former club captain Mr B. Hall Blyth championed the latter choice and he proved persuasive. The club purchased the land in early 1891. Incredibly, by May of the same year the new “green” at Muirfield was open for play.

So, amusingly, the Honourable Company made a move from one racecourse to another – The “Hundred Acre Field” on the Archerfield Estate that became the golf course, had been the venue for the annual East Lothian races. Perhaps this was appropriate for a club where the focus was very much on matchplay contests between members, generally with wagers on the result. From 1776, The Company has made use of the famous “Bett Book” in which the “Clerk to the Betts” records the details of each wager made. Not every bet recorded relates to a match on the links though. Here’s one from 1783:

“Mr R. Allan betts one guinea that he will drive a ball from the Castle Hill without the gate of the palisade into the Half-Moon battery over the parapet wall.” He managed it.

The land the Honourable Company moved to in 1891 was lush and green, less sandy than some links and requiring a level of work to produce a suitable playing surface.

Old Tom Morris staked out the course layout and David Plenderleith, together with four assistants, set about levelling mounds, moving earth, banking up bunkers, turfing and raking. On 2nd May 1891, 16 holes were ready for play, the last two completed by the end of the year.

It was a monumental effort, not only to get the course ready for play so quickly, but also to have the layout to a standard where, in just the following year, it could host the Open Championship.

The 1892 championship was the first to be held over 72 holes and was won by amateur Harold Hilton. The course received praise from the likes of Bernard Darwin but there were critics – Andrew Kirkaldy said the track was “naething but an auld water meedie (meadow.)” Perhaps the fact he’d just finished 13th, 16 shots behind an Englishman had something to do with the sideswipe. The layout was well received enough for the Open to return just four years later in 1896 and again in 1901 and 1906.

There have been numerous alterations to the course at Muirfield over the last 120 years and the links has continually evolved to meet the changing requirements of both members and visiting competitions. The current layout presents a golfing test that is, arguably, the very best there is; something the world’s oldest golf club is rightly proud of.

1 You must Tee your Ball within a Club’s length of the Hole.
2 Your Tee must be upon the Ground.
3 You are not to change the Ball which you Strike off the Tee.
4 You are not to remove, Stones, Bones or any Break Club, for the sake of playing your Ball, Except upon the fair Green & that only within a Club’s length of your Ball.
5 If your Ball comes among Watter or any wattery filth, you are at liberty to take out your Ball & bringing it behind the hazard & Teeing it, you may play it with any Club & allow your Adversary a Stroke for so getting out your Ball.
6 If your Balls be found any where touching one another, You are to lift the first Ball, till you play the last.
7 At Holling, you are to play your Ball honestly for the Hole, and, not to play upon your Adversary’s Ball not lying in your way to the Hole.
8 If you should lose your Ball, by it’s being taken up, or any other way, you are to go back to the Spot where you struck last, & drop another Ball, And allow your adversary a Stroke for the misfortune.
9 No man at Holling his Ball, is to be allowed, to mark his way to the Hole with his Club, or anything else.
10 If a Ball be stopp’d by any person, Horse, Dog, or any thing else, The Ball so stop’d must be play’d, where it lyes.
11 If you draw your Club in order to Strike & proceed so far in the Stroke as to be bringing down your Club; If then, your Club shall, break, in any way, it is to be Accounted a Stroke.
12 He, whose Ball lyes farthest from the Hole is obliged to play first.
13 Neither Trench, Ditch or Dyke, made for the Preservation of the Links, nor the Scholar’s Holes or the Soldier’s Lines, shall be accounted a Hazard; But the Ball is to be taken out / Teed / & play’d with any Iron Club.
John Rattray, Capt
Read more at http://www.golf-monthly.co.uk/features/the-game/what-is-the-oldest-golf-club-in-the-world-66398#o0516QrzBFKTadKs.99

Lynda O’Keeffe had a hole in one on the 11th hole on Sunday on her way to winning the Captain’s prize to the Ladies.

Lynda also won the medal last week and as her partner (BB) in the mixed said “her achievements are certainly worth a mention on the members site”. So say all of us. 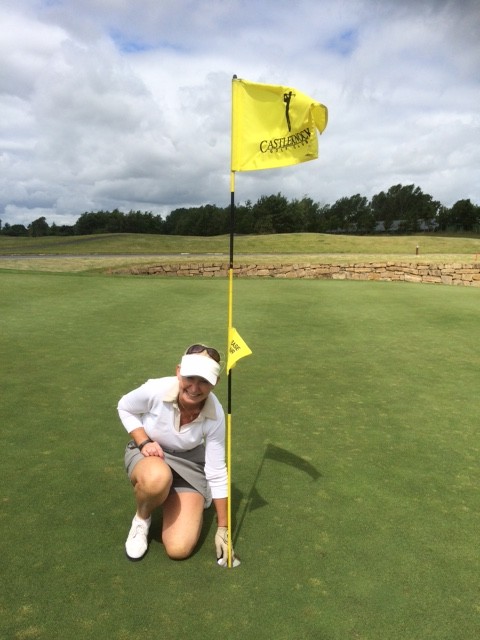 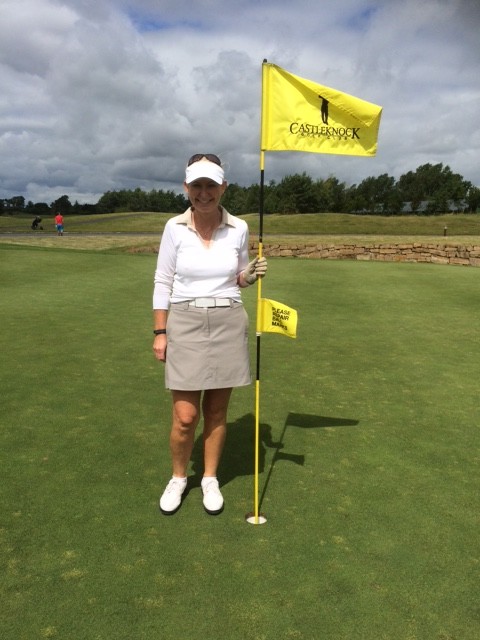 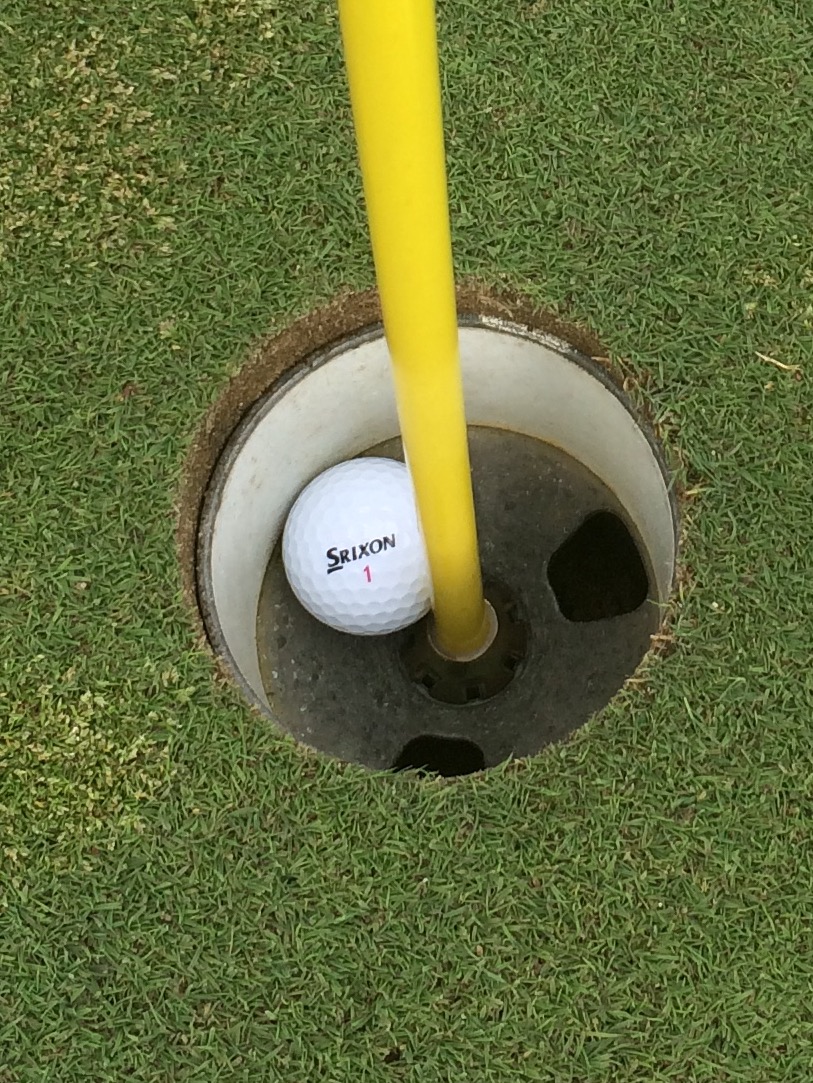