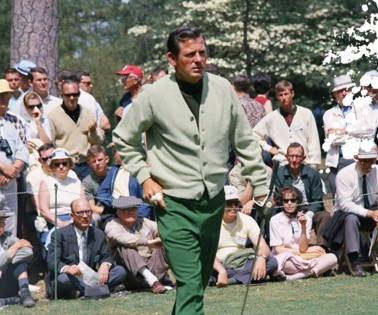 Born into a poor family, Sanders picked cotton as a boy and taught himself to play golf.

He was named one of America’s Best Dressed Jocks in 1973. Notable for having a swing so short it was said he could unleash it in a phonebox, Sanders was forced to finish a Pro-Am competition in a head bandage after being struck by a wayward three wood from then President Spiro Agnew.

Doug famously missed a two-footer on the 72nd hole in The British Open at St Andrews in 1970. However, no one remembers the extraordinary bunker shot he played at the penultimate Road Hole to give himself the chance of victory, but hey-ho. A sensational 18 hole play-off followed the next day that he lost by one shot to Jack Nicklaus. Doug was asked recently if there was ever a day went by that he didn’t think about that putt. Doug shrugged his shoulders and said with a conspiratorial wink: “No, no, no…. there isn’t ever five minutes that goes by without me thinking about that putt”.

Doug Sanders recorded 20 PGA Tour wins but never won a major, finishing runner up twice at The British Open and once at the US open and PGA Championship.

Despite his lack of a major, Sanders led a truly remarkable life. Nicknamed ‘The Peacock of the Fairways’ due to his sartorial elegance, Sanders was a genuine 1970s playboy, blazing it up on the fairways by day and tearing it up at night on the town with Frank Sinatra, Sammy Davis Jnr and the rest of the Rat Pack. When he wasn’t hanging with the Rat Pack he was playing golf and sipping cocktails with astronauts and Presidents.

It is said that the two most frequently asked questions on the Senior PGA Tour were “What did Arnold Palmer shoot?” and “What is Doug Sanders wearing?”

“I’m as rich as any man or woman in the world,” Sanders told us. “Because I weigh and measure my wealth by friends, and golf has given me that opportunity.” We will certainly drink to that, Doug.

AKRON, Ohio — The final round of the Bridgestone Invitational was supposed to unfold as a spirited duel between Jim Furyk and Justin Rose, playing partners who entered the day tied for the lead. Instead, a humid afternoon at Firestone Country Club devolved into a frantic scramble at the top. 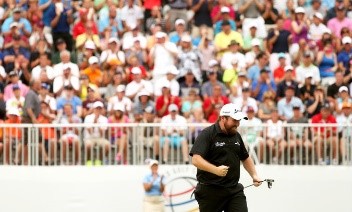 Emerging from the chaos was Shane Lowry, a relatively unheralded Irishman, who turned in an unexpectedly sharp display to surge past Furyk and Rose and fend off a charging Bubba Watson to win the title.

Closing with a four-under-par 66, Lowry finished 11-under 269 to edge Watson, who rose up the leader board with a series of powerful drives, by two strokes. The victory is Lowry’s first in a World Championships Golf event, and he is the first non-PGA Tour member to win such a tournament since 2011.

“I played as good of golf as I’ve ever played the last four days,” Lowry said.

Indeed, Lowry took advantage as Rose and Furyk, who tied for third place at seven under, collapsed ahead of him.

Before his unraveling, Rose, 35, entered Sunday in a favorable position and filled with confidence after making seven birdies on Saturday. He was undone, however, by four dispiriting bogeys and shot a two-over 72. Furyk, 45, stumbled in the same fashion. A perennial contender here, Furyk was at times flummoxed by his short game and also made four bogeys and shot a 72. He now has five top-5 finishes and 10 top-10 finishes in this tournament.

It was Lowry, a bearded and bulky man ranked No. 48, who stirred the crowd instead, with his soft hands, even demeanor and steady play.

Perhaps the moment that best defined Lowry’s triumph was on the 18th hole, where, in the midst of a tight contest, his drive sailed left and into the rough.

“When you see Bubba and Jim Furyk and Justin Rose chasing you down, you know it’s going to be tough,” Lowry said.

Lowry responded with a spectacular 143-yard shot that ripped through the tree line, landed neatly on the green and stopped 11 feet from the hole. He offered a sheepish smiled afterward and pumped his fists as if he knew that he had all but sealed the victory. Lowry birdied the hole.

While the Bridgestone remains an important and celebrated event, the final tournament before the P.G.A. Championship at Whistling Straits in Wisconsin next week, it lacked its typical flair this year.

Rory McIlroy, who is ranked No. 1, did not defend his title at Firestone because of a lingering injury to his left ankle. His absence was the first time the title went undefended in seven years. Instead, McIlroy, who also pulled out of the British Open, played a practice round Saturday at Whistling Straits in anticipation of the P.G.A.

Tiger Woods, who has won the Bridgestone title eight times, failed to qualify, registering another milestone in his two-year free-fall since he won here in 2014.

“It’s kind of weird to not see him playing the events that we’re usually used to seeing him playing,” said Jason Day, who tied for 12th after making four birdies for a one-under 69.

“This is one of those events that he plays well and wins a lot here,” Day said. “Eight times, it’s just amazing to even think about. Some guys are just hoping for one WGC win, let alone eight times at one venue.”

Jordan Spieth, who has become something of golf’s golden boy this summer after a stirring win at the Masters and a gritty triumph at the United States Open, tied for 10th and entered the final round trailing by nine strokes. And though he played his best Sunday — a four-under 66 for a 72-hole total of 276 — he could not overcome the gap. Ricky Fowler, who also finished four-under 276, was also more or less a nonfactor in the final round.

Against this backdrop, there was something strange about a significant tournament without the likes of McIlroy and Woods, and something equally peculiar as favorites to win the event struggled to flex their muscles one last time before the year’s final major.

Even so, they turned their attention toward a rendezvous off the shores of Lake Michigan, where McIlroy was expected to defend his P.G.A. championship. For Spieth, it is a chance to make history by becoming the third player to win three majors in a season. For others, like Rose, it is a chance for a redemption of sorts.

He was harshly critical of his play Sunday, then added playfully, “I’m saving myself,” for the P.G.A.