Who Is Michael Greller? Jordan’s Spieth’s Former Schoolteacher Caddie Who Made And Estimated $2M In 2015

Michael Greller made a bold decision in 2013, walking away from the steady paycheck of his teaching career, choosing to chase down a dream by caddying for Jordan Spieth, then the top-ranked amateur golfer in the United States. With the 2015 PGA Tour season now complete, it seems like that gamble paid off: Greller likely earned about $2 million this year caddying for Spieth, now the top-ranked professional golfer in the world.

That total, which doesn’t include a weekly stipend golfers typically pay to caddies, is so large because Spieth won five times on tour, including two majors and the Tour Championship last weekend. The 22-year-old also finished in the top 10 an eye-popping 15 times and won the FedEx Cup playoffs, which comes with a $10 million bonus that likely paid Greller $1 million.

Greller first met Spieth in 2011 when the then-schoolteacher caddied for the Texan at the 2011 U.S. Junior Amateur at Gold Mountain in Washington state. Spieth won the tournament and would go on to bring Greller back on board when the golfer played in the 2012 U.S. Open. From there, Greller quit his job to caddy full time for Spieth. But the 37-year-old’s lessons from his time as a teacher apparently have carried over to the golf course.

“Everything I have done in my life prepared me for this, specifically teaching for 10 years,” he told the Seattle Times in 2014. “Being able to think on your feet, being adaptable and having thick skin. … You are going to mess up — and if you are not confident in yourself, your player picks up on that. You have to be willing to serve and encourage. Just like in teaching.”

Since then, Greller and Spieth have developed a comfortable relationship while the former teacher is making huge paychecks doing a job he used to perform for free. In the eyes of Spieth and Greller, they have a familial of relationship and often are seen embracing on the course.

“Every day, someone asks if we were teammates or classmates. I always tell him it’s because of his receding hairline. I get a kick out of that,” Greller told GolfChannel.com in 2014. “I see it more as a brotherly relationship. We compete hard and talk a lot of trash. I was born and raised in Michigan. He picks on my teams; I rag on his Texas teams.”

After the season the two experienced in 2015, with wins at the Masters and the U.S. Open, there’s likely a lot less time for ragging in between all of the celebrating.

Frank Farrelly scoring a hole-in-one on hole 7a The European Club, on Sunday 15/11.  As you can see from the flag it was very stormy but Frank played a high 8 iron to bounce once and straight in. This green is elevated high above the tee box behind. 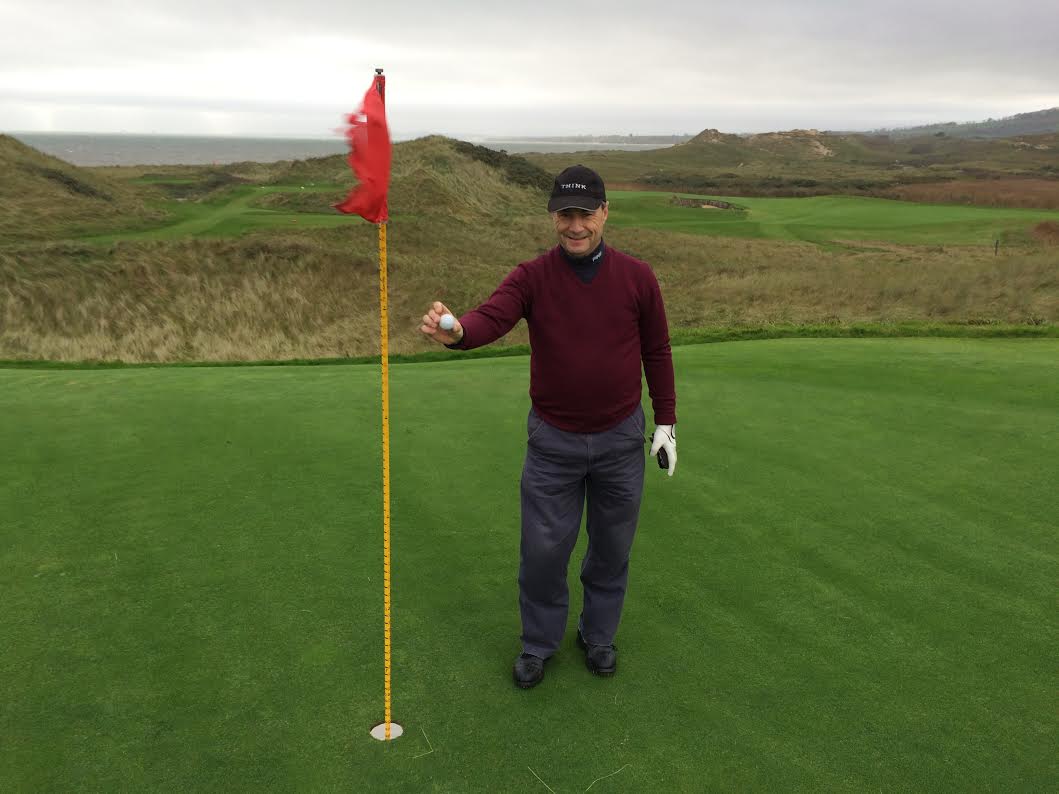 ‘I achieved everything I wanted to in golf’.

Golfing legend Gary Player turns 80 on Sunday. In between designing golf courses, raising money for education and working on his ranch, Player spoke with USA TODAY Sports about his life, achievements, and what he thinks of golf today.

Q: Even at 80, you have so much on your plate. What keeps you the busiest?

A: I achieved everything I wanted to in golf. I work on my ranch five months a year, which is my paradise. I have a great desire to help the young people of the world because even in a country like America, you can have 100 million people with diabetes in 40 years’ time. What is the best cure for diabetes? Diet and exercise! That’s my great dream now. To get this message out to young people around the world. Also, I’ve set myself a goal to raise $100 million for underprivileged people, mainly on the them of education.

We have it set up in China, we have it set up in Abu Dhabi, in the Middle East, South Africa, where Nelson Mandela and I started this and we raised a lot of money for young black children. We have set up in London for homeless people. We play the tournament in five parts of the world, and wherever we raise the money, we give the money to that country. Now, my great dream is before I die to raise $100 million around the world for underprivileged children and education.

Q: How close are you?

A: We’ve raised $60 million. The thing of it is I’m designing golf courses. I’m doing after-dinner speaking. I want to be the best orator of all athletes, so I’m still learning to keep my mind sharp. I keep working hard, because as I say, retirement is a death warrant. People should forget about that word, retirement. Keep working! Keep moving! It’s so important.

But it’s easier to get a camel through the eye of a needle than to get people to diet and exercise.  Nobody wants to do it. All we’ve got to do is a simple, simple thing. People have got to get a treadmill, put it in the bathroom, and when they wake up, before they have their shower, walk on it for a lousy 10 minutes. That’s easy to do.

The other thing is, the less you eat, the longer you live. Don’t eat a lot at night before you go to bed. Have tiny, little dinners. Two nights a week, I try to have no dinners. Today, I feel like a lion! You don’t put gas in your car before you park it in your garage at night. You need a good breakfast and a good lunch, when you’re moving and you need the energy. You don’t need the energy at night! Your body needs a rest. My advice to people: Exercise for a lousy 10 minutes a day. Eat less, and eat sensibly.

Q: Golfers today care more about their fitness, and they’re working with trainers. You’ve been doing that from day one. What effect has that had on the game?

A. You know how good I feel when I see young guys working out now? When I started it, nobody lifted weights. They saw me squatting with 325 lbs., and they came out and said, ‘Gary Player will never last. He’ll be finished when he’s 35.’ I won a tournament on the U.S. tour at 63! I used to go down to a YMCA and wait my turn! It was very difficult. I was flying around the world, and you had to find out where there was a YMCA.

Now, they have a traveling gymnasium on every tour in the world. They do everything to help these guys. It’s another world.

Remember, these guys are great role models, these young golfers. They show the world how they are working out, and it definitely has an influence which makes me feel so, so good, because I was ridiculed. They thought I was a nut. They said you cannot lift weights and play golf. You cannot do those kind of exercises. You can imagine, I went through a barrier of being ridiculed and criticized. I was always told I was doing the wrong thing and influencing people incorrectly. You can imagine how I feel today — very relieved.

Q: What do you think of the younger golfers?

A: Jason Day and Rory McIlroy and Jordan Spieth and Rickie Fowler, and there are others. There are a lot of guys like mushrooms in the field. All of a sudden they will shoot up, and they’ll do well. I’m a big fan. They are behaving well. They dress nicely, they’re speaking well, they have good manners. It’s terrific.

All other sports are play and away. Golf is play, and stay. No sport has the longevity that golf does. And no sport get the coverage that golf does. There is a golf tournament almost every single week of the year around the globe.

So these young people are playing golf, and it’s the passport to the world. It’s teaching them so much. They’ve got to be on time. You know, I was only late once in my life. It was in Tampa. Two seconds late on the tee, and I was penalized two shots. I said to the guy, how can you tell me I’m two seconds late? He said, ‘Look at the digital clock. It doesn’t lie.’ It’s still a debatable issue, though! There’s no Mulligans in life. That’s the discipline of golf.

A: I’m excited as can be because I’ve just been named the captain of the South African team. I’m very excited about that. I had the privilege of being in the Olympic games in 1956, and I had the honor of meeting Jesse Owens at that time. We had many political discussions and here I’m captaining the South African team in Brazil. …  It will promote golf to the hilt, because you’ll have the smaller nations of the world seeing golf for the first time of any significance. It could make a very big difference.

Q: How do you expect South Africa to perform?

A: We’ve got as good of a chance as anybody! We’ll probably have Branden Graceand Louis Oosthuizen, who are both rated in the top 10 players of probably the world, so they’ll do as well as anybody.

Q: Tiger Woods has been dealing with many health issues. Will he be able to come back and win another tournament?

A: It’s a very debatable issue. First of all, the man was the most talented man to ever play golf. I’m very careful about making predictions about a man who is so talented. He has an enormous mountain to climb. Three knee operations. Two back operations, and a few other things that have happened in his career. He had the yips in a couple tournaments.

He’s got a monumental task, but if anyone can overcome that, it’s Tiger Woods. I hope that he does come back and win tournaments, and win majors. Because when he plays, the barometer goes up. More people. More media, and the sponsors and the public are all there to see him play the way he used to. Only God knows, and it’s up to Tiger as well. But he’s got as big a challenge as anybody has ever had in the game.

Q: Finally, what do you want your legacy to be?

A: My legacy that I’d like to leave is that I helped change lives. If we all do something, it doesn’t matter what position you’re in. I’m fortunate enough to be in a commanding position where I can raise a fortune of money to underprivileged people, and children who are suffering and who are poor. But you don’t have to do that. If you can do some little thing — and this is where America is so great, Americans are great at contributing to society…

The big thing is, the great thing I would like to be remembered for, not for my golfing prowess, but a man who tried to help the world, who tried to help people who are suffering. When I was a young man, I suffered. My mother died. My brother went to war at 17 to fight with the Americans and the British.  My sister was in boarding school. I struggled like a dog as a kid, and I said when — I never said if —I become a champion, I’m going to help people who struggle. That is my legacy.