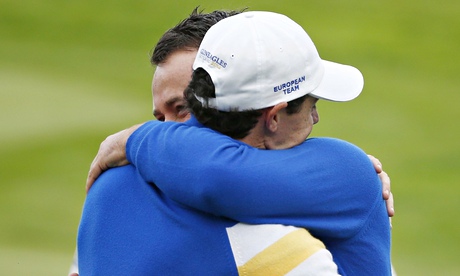 The buildup had been dominated by speculation as to the nature of their relationship and whether they would resume their previous Ryder Cup playing partnership. It ended with a moist-eyed Graeme McDowell and the world No1, Rory McIlroy, clinging to one another in jubilation on the 17th green after the former had completed a stirring 2&1 comeback victory against the US wunderkind Jordan Spieth.

The beaten American was engaging in a bear hug of his own half an hour later with Patrick Reed, his playing partner for the first two days in a Ryder Cup that has definitively announced their arrival as major forces in the game, after he secured a narrow last-hole victory over Henrik Stenson.

“You’ve got Big Macs, we’ve G-Mac,” so sang the boisterous crowd at the first tee as McDowell led out Paul McGinley’s European side. That playful needle was to have ramifications later when a pumped-up Reed engaged in his own running battle with the crowd, having been heckled for a missed putt the previous day. Reed took on the role of the American Ian Poulter for the day, almost bursting a blood vessel as he raged, fist-pumped and gesticulated his way around 18 holes of a pulsating contest with Stenson.

When Stenson finally missed an easy putt at the last to leave Reed – who had just narrowly missed his own eagle putt – with a one-hole victory, it was the first time all day that the American looked lost for words. He had enraged the partisan galleries on the seventh by putting his finger to his lips after sinking his second birdie in a row. By the time he strode up the par-five ninth, the Americans in the crowd were loudly hailing their new hero. One overrefreshed fan in a stars-and-stripes top hat could be seen wildly gesticulating and shouting “Patrick Fucking Reed” over and over again.

The Europeans, meanwhile, had a new pantomime villain. As Reed found water on the ninth, they loudly shouted “sshhh” and mocked his waistline. The fiesty Reed, however, has already shown that he does not lack for self-confidence and seemed to use the unnecessary barracking as fuel for his fire. Spieth, too, began with a red-hot run of form that justified Tom Watson’s decision to put him and Reed, the bullish rookies who had gone through the first two days unbeaten, at the top of the order.

McDowell, who had shepherded the talented French rookie Victor Dubuisson through the first two days in swashbuckling style after McGinley opted to break his partnership with McIlroy, almost went one up on that first tee but saw his putt lip out.

Thereafter, Spieth was inspired, achieving a run of birdies to go three up by the fifth hole. His beaming parents, following closely as they had been all week, glowed with pride at their prodigiously talented son. McDowell was simply clinging on while the seemingly nerveless 21-year-old retained his calm focus and displayed his range of shot making ability.

Then Spieth, so impressive on his Ryder Cup debut as part of the youngest Ryder Cup US pair in history with Reed, missed a straightforward putt on the par-four seventh to give McDowell hope. McDowell took full advantage as Spieth, for the first time in three metronomic days, began to betray signs of nerves. Two bogies in the space of three holes helped the Northern Irishman, at his battling best, claw back Spieth’s lead.

“I just felt something inside me start to turn around. I’m just relieved to get that point across the line,” he said afterwards. “The captain gave me a big role this morning and I was just happy to deliver.”

By the time McDowell had holed out from 10 feet after hitting the flag from the bunker on the 17th, having literally jogged from the previous hole to capitalise on his momentum, he had secured a key victory.

“This is what we play for, this is what we practise for,” said McDowell, who had been drawn into the speculation around a court case between McIlroy and his former management company. Neither was thinking about that as they embraced on the green.

For the baby-faced Spieth and Reed, so impressive at Gleneagles, there will be many more Ryder Cups and they at least provided Tom Watson with the fight and spark sometimes lacking elsewhere. For McDowell, a key ingredient in the European recipe for success who demonstrated in his mentoring of Dubuisson his influence on and off the course, there was only joy at the here and now.

“You want it so bad that you get in your own way sometimes. You have to remind yourself that this is what it is all about.”

When Darren Clarke’s wife, Heather, died in August 2006, many top European players –Graeme McDowell, Padraig Harrington and Lee Westwood among them -considered pulling out of the PGA Championship at Medinah, outside of Chicago, to attend the funeral in Northern Ireland. Clarke balked, insisting that Heather would have wanted them to play on. But at least one qualifier withdrew anyway: Paul McGinley.

“Our two families are very much intertwined,” McGinley said at the time. “Heather and Ali [McGinley’s wife] were the best of friends and our kids are in the same class at school. It is a tough, tough time for us all.”

McGinley is from the south of Dublin, but growing up he summered in Northern Ireland, where he and Clarke hatched a friendship playing junior golf, sometimes carpooling to tournaments together.

In 1990, they squared off in the final of the North of Ireland, a prestigious amateur event. Clarke won in a tight match, but it was obvious that both players had bright futures. Clarke went on to win 14 times on the European tour, McGinley won four times, and both players thrived at the Ryder Cup, Clarke playing on four winning sides, McGinley on three. In 2012, the old friends served as vice-captains on José María Olazábal’s victorious European team, setting up the Irishmen for their own Ryder Cup captainships.

But when?  Clarke, in a letter, had informed McGinley that he wasn’t interested in the job for ’14, which helped clear the way for a McGinley captainship. But shortly after the 2012 Ryder Cup at Medinah,

Clarke pulled an about-face, tossing his hat back in the ring to captain the ’14 team. In Clarke’s corner was Ryder Cup stalwart Westwood, who went to bat for the burly Northern Irishman at a tournament press conference in Turkey.

“And when that happens,” Paul Kimmage of the Irish Independent asked McGinley in a recent interview, “there has to be a part of you thinking, ‘What the f— is going on here?’”

McGinley: Of course there is but I’d rather not talk about it. I’ve moved on from it and unfortunately friendships have . . . whatever has happened, has happened. I’m on the verge of the Ryder Cup and I don’t want to be dragging up all this stuff.

Kimmage: You don’t want to talk about it?

McGinley: No, it happened, it’s over, we move on.

Only that’s not where the story ended. In late 2012, Clarke changed his mind again, proclaiming that he’d rather play on the ’14 team than captain it. He also said that, “Whoever it is standing on that stage opposite Tom Watson needs a huge presence. We seriously need the right man for the job.”

Kimmage: … the killer blow wasn’t when Darren decided to stand against you, it was when he withdrew and rowed in behind Monty, someone he didn’t actually like.

(McGinley smiles but does not reply.)

Much has been said and written about how the Ryder Cup bonds the Europeans, but in McGinley and Clarke’s case, the competition for the captaincy appears to have torn them apart. In the ensuing months after McGinley was named captain, he went on to appoint a record five vice-captains. Clarke wasn’t one of them.

Padraig Harrington was, which means come next week at Gleneagles, with McDowell and Rory McIlroy competing and McGinley and Harrington captaining, Clarke will be the odd Irishman out.

The Spirit of the Game

Unlike many sports, golf is played, for the most part, without the supervision of a referee or umpire. The game relies on the integrity of the individual to show consideration for other players and to abide by the rules. All players should conduct themselves in a disciplined manner, demonstrating courtesy and sportmanship at all times, irrespective of how competitive they may be. This is the spirit of the game of golf.

Etiquette is a word that’s often heard in relation to golf, more so than with any other sport. But it’s not just about manners, the guidelines for good golf etiquette are there for several very important reasons. Many of them relate to the safety of golfers, many relate to pace of play, and other rules of golf etiquette relate to maintaining the quality of the golf course.

In other words, golf etiquette is an essential part of the game. 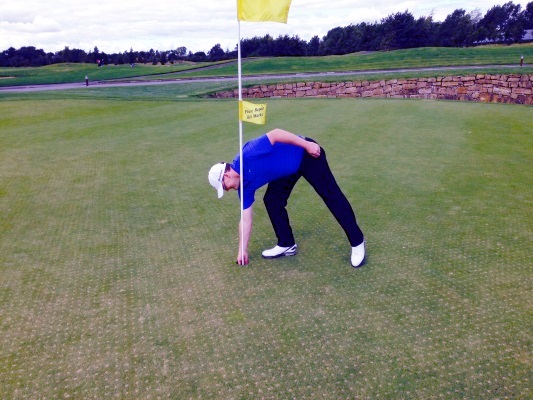